Escape to the idyllic waters on a Killaloe boat trip

The River Shannon is the very artery of the Irish nation, winding through the heart of the country; Shannon cruises are the perfect way of experiencing both rural and urban Ireland. Though there are many destinations for boating holidays in Ireland, the iconic village of Killaloe is arguably one of the best. A Killaloe boat trip encompasses everything that makes such a holiday great; beautiful river and countryside scenery, idyllic Irish villages and great expansive Irish loughs.

A Killaloe boat cruise can take you between world-famous cities and towns such as Limerick and also take in the best that the River Shannon has to offer. So let’s jump right in and see what a Killaloe boat trip entails, where to begin and what the beautiful Emerald Isle has to offer as a whole.


Where do Killaloe river cruises begin?

The first thing you need to decide is where you are going to begin your boating holiday down the River Shannon and to the village of Killaloe. Two destinations are ideal for starting out, both of which are home to well-established Locaboat sites.

The first of these is the famous town of Carrick-on-Shannon, around ninety miles north of Killaloe. Although this will mean your journey through Ireland will be a much longer one, Carrick-on-Shannon boat hire will allow you to see far more attractions along the River Shannon before arriving at the village of Killaloe.

A more popular starting point is from the town of Banagher, only forty miles north of Killaloe. By taking this route, Killaloe cruises pass from the charming town of Banagher through the vast and exciting Lough Derg and the many points of interest along the way. By starting your canal boat hire here, you can also extend your boating holiday into the famous world-famous Irish city of Limerick – only adding to the route’s allure.

Top sights to see on your way to Killaloe 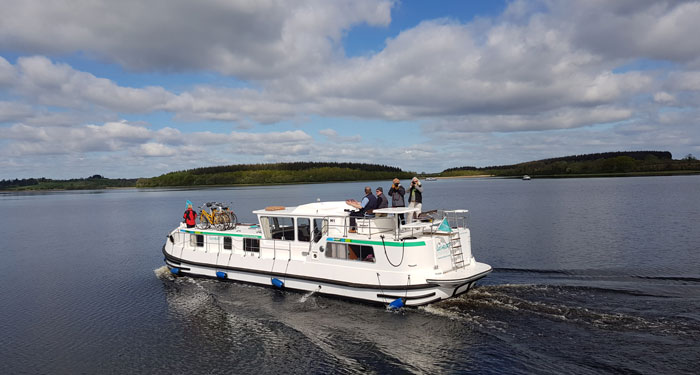 Once you have left the town of Banagher, your journey will begin by boating southwest along the River Shannon. The first landmark and must-visit sight you will come to is the area of Meelick. On the most popular sights here is the Three Counties Shannon View, an island inlet that is famous for being the meeting point of three Irish counties, County Tipperary, County Offaly and County Galway.

This gives you the first perfect opportunity to get out of the boat and explore the River Shannon banks, perfect for hiking and wandering through nature. Another landmark not to be missed here is the Meelick Martello Tower. This fortified tower was constructed in the early 19th century built to protect a possible invasion by Napoleonic forces on the Irish west coast.

Carrying on down the river, you will come to the town of Portumna, at the mouth of Lough Derg. Portumna to Killaloe by boat will take you across the vast expanses of Lough Derg, a true highlight of any Killaloe Boat Trip . Lough Derg is a stand-alone attraction in Ireland and is a natural playground for nature lovers, boaters, anglers, and so much more.

As you boat across the vast lake, you can spend your time trying to catch a few fish. Seen as one the best places for fishing in the whole of Ireland, you can land fish species such as bream, tench, roach, perch and record-breaking pike, some of the largest seen anywhere in northern Europe.

As well as world-class fishing, Lough Derg is also home to Inis Cealtra, known as Holy Island in English. Standing on the island is one of Ireland’s oldest Christian landmarks, a monastery constructed in the early 6th century. Visiting the island before continuing your Killaloe boat trip will pull back the curtain on Ireland’s past, mixing thought-provoking history with stunning natural landscapes.

Entering the village of Killaloe

After exiting Lough Derg, your route will take you to the highlight of the journey, the large village of Killaloe. More of two village areas along the River Shannon, Killaloe on the western banks are connected to the village of Ballina on the eastern banks by the Killaloe bridge . Both of these settlements present an ideal place to stop and explore, and with the huge Killaloe marina , you will find the most welcoming place to moar up and begin your exploration.

One of the best and most simple things to do is to take to the shore and walk around the charming village. With the idyllic and chocolate-box houses lining the river banks, a simple walk around the town will undoubtedly have you falling in love with Killaloe in mere moments.

Notable sights to see include St.Lua’s Oratory, situated on the grounds of Killaloe Catholic Church one of the oldest sites in the whole village. A walk across Killaloe Bridge is also another must-do when in the town. The iconic stone bridge is made up of thirteen arches and was constructed in the 18th century. There’s a plaque marking the partial rebuild in 1825 after seven arches were swept away. Another monument commemorates four men who were shot on the bridge in 1920 during the War of Independence.

If you happen to conduct your Killaloe boat trip into the village on a Sunday, be sure to visit the Sunday Farmer’s Market in Killaloe. First begun in the early 2000s, the market has become one of the liveliest and popular markets of its kind in this area of Ireland. A fantastic place to buy a range of artisan foods, including organic produce, locally made cheeses, baked goods and numerous arts and crafts.

Journey on to the city of Limerick

Once your journey through Killaloe is finished, why not add something extra special to your Killaloe boat trip and carry on further south to the city of Limerick, one of Ireland’s major cities. World-famous for lending its name to a form of humorous poetry, the city has numerous attractions and sights that make for a perfect ending to a boating holiday down the Shannon River. From iconic medieval castles, museums and art galleries to more modern attractions, including restaurants and nightlife, Limerick is a place you will not soon forget.