Where is Lough Ree?

Lough Ree stands at the geographical centre of Ireland in a region known as the Irish midlands. Straddling the border between two Irish counties, County Longford and County Westmeath, Lough Ree sits along the River Shannon and is the second-largest of three major lakes along this famous river.

The open lake covers an area of more than 41 square miles with an extensive shoreline and several islands to explore. This huge expanse of water makes Lough Ree one of the most attractive places to explore along the waterways of central Ireland. A mixture of pure lakeside nature and wildlife mixed with local myths and legends creates some of the best places to make memories on a Lough Ree boat trip .

Situated midway between Carrick-on-Shannon and the town of Banagher, boating holidays on Lough Ree can be seamlessly organised from either of these major starting points. This locality also allows you to travel along the river and visit some of the most popular sights and landmarks on one of Ireland’s most famous and celebrated waterways.

One of the shining highlights of this Irish lake is the fact that it has been designated a Special Area of Conservation. This title means that Lough Ree and the areas around the lake are protected due to its fantastic flora and fauna – only adding to the draw of Lough Ree and its surrounding area.

How do you get to Lough Ree?

Nestled into the geographical centre of Ireland, travelling to and from the Lough Ree is easy to do from a number of different directions, each of which offers up its own unique experience.

Beginning your adventure from Carrick-on-Shannon

One of the main starting points for Lough Ree cruisers and other River Shannon boat trips is from the town of Carrick-on-Shannon.

Taking to the water from Banagher

On the other hand, you may wish to approach Lough Ree from the south, which is also super simple. The town of Banagher in western County Offaly is only 27 miles south of the southern tip of Lough Ree and can be the ideal starting point for any Lough Ree boating holiday . The newest addition to the Locaboat bases, Banagher is a charming small town that is the best jumping-off point for exploring the lower River Shannon and arriving at Lough Ree from its southernmost point.

Starting your journey from the capital

The centralised location of Lough Ree also allows an approach from the east, something that is unique when it comes to Ireland’s central lakes. Boating from the northeast, you can travel from the country’s capital of Dublin via the Royal Canal, joining the River Shannon just south of Carrick-on-Shannon.

Similarly, you can also travel along the Grand Canal from Dublin, approaching from the southeast. This route will join the Royal Canal to the River Shannon, just south of Shannonbridge.

Deciding which route to approach Lough Ree will all depend on what sort of Lough Ree cruise you’re looking for. Approaching the lough from the north, south, or east will all provide a different cruise experience, and it is down to you to decide.


5 top things to do at Lough Ree

1. Immerse yourself in the fantastic wildlife 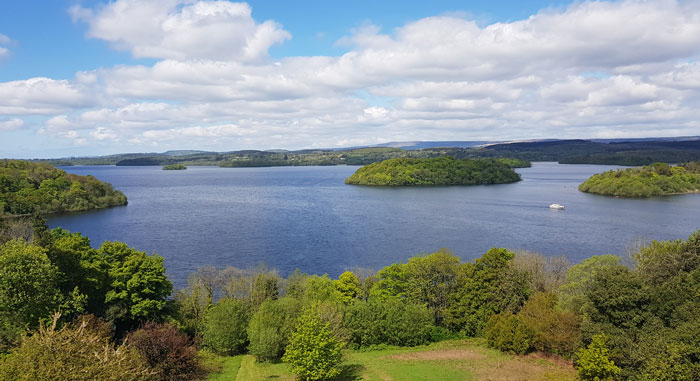 As a designated Special Area of Conservation, Lough Ree and its surrounding area have become an Irish mecca for wildlife spotting. Nature lovers will be blown away by the sheer scale of the rolling countryside, oak woods and small waterway inlets.

Birdlife can be found in abundance here, attracting an array of both wintering and breeding birds. Bird fanatics will be delighted with the sight of breeding waterfowl such as Common Scoter, Great Crested Grebe, Wigeon, Teal, Goldeneye and Tufted duck.

The common turn, despite its names, is one of the rarest birds to be found here and is protected by European law. These can be found in protected nesting sights on many of the loughs 52 islands. These islands are deliberately uninhabited and protected to ensure the nesting sights go undisturbed by those on Shannon cruises.

Though usually quite literally flying under the radar, Lough Ree and the surrounding woodland and grassland areas are also home to a multitude of insect life. Most loved of these is the populations of butterflies that can be seen here during the Spring and Summer months. Keep an eye out for butterflies such as the common blue, meadow brown and ringlet. There are also, unsurprisingly, a number of dragonflies that can be seen across the water – including the common darter dragonfly and the ruddy darter dragonfly.

A wildlife lover’s most sought after sight on Lough Ree is its population of otters. With an abundance of fish to eat and secluded hiding places found all around the lough, its otter population is strong and well – the same can not be said for many other otter populations around Europe. A quiet and secretive animal, the best time to see these water-dwelling mammals is by the faint light of dusk or dawn.

2. Try your hand at a spot of fishing on Lough Ree

The lough, lakes and waterways of inner Ireland have long held a reputation for being some of the best fishing spots in western Europe, and Lough Ree is no exception. With such a large expanse of water, the opportunity to fish in different swims and the chances to catch different species are endless.

Coarse fishing for bream, roach, tench is most popular at the Hot Water Stretch section of the lake, located on the northern edges of Lough Ree . There are also opportunities for predator fishing for Pike, Perch Trout and Zander available on Lough Ree North fishery. Lough Ree marina is a great place to start, with the local Lough Ree Angling Hub providing all the knowledge and direction to get the most of your angling experience on Lough Ree.

This abundance of fish in Lough Ree is a testament to the sustainability safeguards in place, both from an ecological and angling point of view – something that has been praised for a long time in and around Lough Ree.

3. Visit the idyllic town of Lanesborough

Although relevantly small, the idyllic town is one that speaks for itself regardless of the limited attractions it may have. Wandering around the town will give you a great feeling of Irish charm and the famous hospitality that only comes with such a town.

4. Discover the historic town of Athlone

One of the most popular landmarks and sights in Athlone is the medieval Athlone Castle. First constructed in the mid-12th century, Athlone Castle has a long and turbulent history and is a great example of Ireland’s place in the history of northwest Europe during the medieval period. As well as learning about the history of the castle, you can also scale the battlements, offering you stunning views across the town and the wider Lough Ree region.

For those amongst you who enjoy a great pint of beer, a trip to Sean’s Bar in Athlone is a must. Dating back to the 10th century, Sean’s Bar has been a local watering hole for over a thousand years – an impressive thing to tick off your bucket list! Not only does it serve some of the best beer around, but Sean’s Bar is also considered the oldest pub in all of Europe.

To really get immersed in the water of the Lough Ree , Athlone is the home of ‘Bay sports Athlone’. As Ireland’s largest inflatable water park, Bay Sports Athlone offers a fantastic activity for the whole family to enjoy. Aside from the fantastical water park itself, it is here that you can enjoy a range of watersports activities, including paddleboarding, pedal boating, rafting and dragon boating. 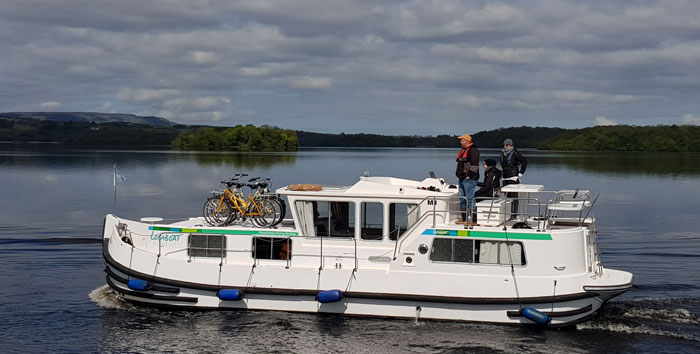 For a chance to exchange the water for two wheels, you can secure yourself a
Lough Ree boat and bike hire package. As one of the best spots in the country to explore by bike, the lough’s surrounding area offers some of the most idyllic cycling routes in Ireland. These cycling pathways run through the woodland, rolling foothills and waterways in both County Longford and County Westmeath.

The famous Green Heartlands Cycling route is an epic 131 miles cycling route that encompasses many of the must-see nature spots around the area. Running along unassuming pathways, quiet country roads and routes through bogs, farmland, forest and wetland. Although this may seem like a far greater cycling route than you would want on a boating holiday, there are sections of the route that can be done in a few short hours – perfect for an afternoon exploring.

As there are a number of different routes you can take to get to and from Lough Ree , there is a chance to see much more of Ireland with your Lough Ree boat hire . Whether it’s travelling down on the canals from the capital, heading northwards from Banagher or southwards from Carrick-on-Shannon, the opportunities are endless.

Beginning your journey from Carrick-on-Shannon

A historic town in its own right, Carrick-on-Shannon has a number of charming historical landmarks – one of the most interesting is the Costello Chapel. It is one of the smallest chapels in Europe and is the resting place of local traders Edward and Mary Costello.

Aside from its history, Carrick-on-Shannon has also gone through a transition of modernisation, especially with its art scene. This can be seen in Carrick-on-Shannon’s 19th-century courthouse that has been restored to become Leitrim’s first integrated centre for the arts, a centre known as The Dock. The Dock holds a 100 seater performance space, three art galleries and an artists studio.

Starting your boat trip from Banagher in County Offaly

Travelling the opposite way, from south to north, can also provide its own delight. The small town of Banagher on the River Shannon offers up a number of must see-sights before you begin your journey north to Lough Ree.

Party-goers shouldn’t pass up the opportunity to visit J.J. Hough’s Singing Pub. This 250-year-old pub is everything you could want from a local Irish bar, including local beer and traditional live Irish music.

While the fort has non of its old glory, the ruin is worth a visit and will take you back instantly to a time where the river would be a place of war and not of gentle boating holidays as it is today.