Travelling along the Shannon Erne waterway

The River Shannon is so closely linked with the identity of Ireland that it is almost interchangeable with the nation itself. Running through the island from coast to its source, Shannon boat hire allows you to see the Emerald Isle in all its glory. Aside from the River Shannon, the River Erne which also sits in the north of the country allows you to travel much of both Ireland and Northern Ireland, taking in two countries in one journey.

Connecting these two famous rivers is the Shannon Erne waterway , a west-to-east passage of water that connects the two. With many sights, landmarks and attractions, this man-made canal is ideal for Shannon-Erne waterway cruises . So let’s see what this waterway has to offer with a canal boat holiday along the Shannon Erne Waterway.

Where is the Shannon Erne Waterway?

The Shannon Erne Waterway is a forty-mile long canal that runs from Leitrim village in County Leitrim to Upper Lough Erne which sits just across the border in Northern Ireland’s County Fermanagh. Opened in the mid-1990s, the canal allows boaters to make the journey across two waterways and two countries. Traversing over 40 miles means that Shannon Erne waterway locks are numbered at sixteen. Many of these are the original stone constructions, while others have been winded and rebuilt out concrete.

Where to begin your Shannon Erne Waterway adventure?

Before you take on a Shannon Erne Waterway boating holiday , you will first need to figure out where you will begin your journey. A few miles southwest of the Shannon Erne canal is the humble town of Carrick-on-Shannon, a base for Locaboat and an attraction all within itself.

The town is a quintessential Irish town, full of local charm and idyllic surroundings. The town is the largest in County Leitrim and the smallest county town in the entire country. Carrick on Shannon boat hire will provide you with everything you’ll need to have a successful boating holiday in Ireland.

Before you head northeast to begin the journey along the waterway, it’s worth having an exploration of the town itself. Carrick-on-Shannon’s mostly attractions are the Carrick Bridge and Quay. These show the history of trading and the river commerce that had built up the town over centuries. Carrick-on-Shannon is also home to the Dock, an art centre housed within a renovated former 19th-century courthouse building.

Heading north towards the start of the Shannon Erne Waterway

As you leave the town of Carrick-on-Shannon, you will head northwards, passing the entrance to Lough Drumharlow and following the River Shannon on a northwesterly route. As you enter the canal, you will come to its first settlement, Leitrim Village. Considered to be the symbolic start of the Shannon Erne Waterway, Leitrim Village is a great place to stop the boat at the Leitrim Marina and explore the village.

Alongside its natural village and photogenic beauty, Leitrim is home to a couple of fantastic landmarks. Top of these is the ruins of O’Rourke’s Castle, a late 15th-century castle built by Sir Brian O’Rourke – the first king and then lord of West Breifne in Ireland from 1566 until his execution in 1591.

Although no longer a fully standing and fortified castle, the ruins give an insight into Leitrim and Ireland’s medieval past. Those with a little more time on their hands can make their way north to the iconic Arigna Mining Experience; a living museum dedicated to coal mining, the history of Arigna and the culture that existed here over the centuries.

Leaving Leitrim Village, you will pass further along the Shannon Erne Waterway. Only a few miles down the canal is another must-stop, the Sheemore Cross. The hill dominates the landscape and can be seen from miles around. A hike to the top of the hill is definitely worth it, as it not only offers amazing views of the entire region, but it is home to a number of noticeable sites too. The most obvious of these is the Sheemore Cross, which is a huge stone cross erected in 1950 in recognition of the dogman of the assumption. Surrounding these are three far older neolithic cairns, proving that the hill has long been a sacred site for the people of Ireland.

Onwards to Lough Scur and beyond 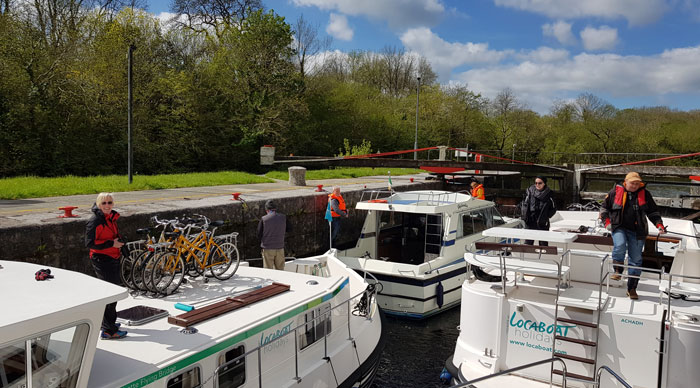 As you pass through a few more locks, your Shannon Erne waterway boat hire will arrive at the first large body of water, Lough Scur. Meaning ‘the lake of the horses, pasturage, troop’, Lough Scur has been a site of interest for centuries. Covering an area of just under half a square mile, the lough has often been overlooked for the far larger lakes and loughs in the local area. Lough Scur makes for an ideal site for stopping and enjoying a spot of fishing. Home to roach, perch, bream, pike, stickleback and eel, there is plenty of opportunities to land that next big fish.

After leaving Lough Scur, the Lough Erne-Shannon waterway then leads you on to the town of Ballinamore, an ideal place to stop for a bite to eat. With a welcoming marina and a number of hearty local countryside eateries and cafes, the small town is a welcoming break after travelling so far. Once you are refreshed, the next attraction along the canal is only around the bend, Glenview Folk Museum.

Glenview Folk Museum opened over two decades ago and is designed to secure the heritage of Ireland for prosperity. The museum is made up of many different attractions from old household and farm items to vehicles and a full street scene which has been fully reconstructed to really give you a feel for 1930s Ireland.

When you have left the Glenview Folk Museum behind, you will find yourself sailing through a series of loughs, one quite large and a few other smaller ones. The first, Lough Garadice, covers seventy-one square miles and is beautiful to behold. Again, you can stop off and enjoy a spot of top angling or simply enjoy the natural beauty of the lake. Surrounded by idyllic shoreline walks and nature, the lough is one that has been relatively untouched by tourism and has managed to retain its natural charm.

After exiting Garadice, the much smaller Ballymagauran Lough and Lough Derrycassan come into play. Far smaller than Garadice, these loughs are far more gentle and laidback, only adding to the relaxing charm of the landscape.

Across the border and into Lough Erne

During the final stages of the Shannon Erne waterway journey, you will boat up to the border town of Ballyconnell. One of the last significant settlements you will visit in the Republic of Ireland, it’s worth stopping just to take a look around and maybe stop for a tipple in one of the local pubs or inns. After refreshing yourself with one last glass of Irish stout, it’s time to make your way from Ireland to the UK. As a soft border, the transition may be an unremarkable one, but a milestone nonetheless.

As you cross the border, the Shannon Erne waterway will flow straight into one of the island’s largest bodies of water, Upper Lough Erne. The vast lake is a wonderland of nature, watersports and general all-around outdoor fun. You can enjoy a treasure trove of activities, and none so more rewarding than a spot of fishing. Seen as one of the top angling sites in all of Northern Ireland, Upper Lough Erne is home to numerous small inlets, small and large islands and shoreline banks. All of these provides a home to a huge variety of fish species, including common roach, wild brown trout, bream, pike and even a number of salmon.

A perfect end to the route in the town of Enniskillen

As you come to the end of your journey of canal boat hire in Ireland, there is no better place to do so than the town of Enniskillen. Situated at the exit of Lower Lough Erne and along the River Erne, the town is a hive of both historical and modern attractions.

One of the most famous attractions in the town is the early 15th-century Enniskillen Castle. Marred with a long history of late medieval sieges, the history of Enniskillen Castle is brought to life with the inhouse museum and its numerous exhibitions. Aside from its original medieval history, the castle was repurposed as a barracks for the British army, as far back as the Napoleonic era.

Alongside the famous castle, Enniskillen is also home to the UNESCO World Heritage Site of Marble Arch Caves. A well-preserved show-cave, visiting the Marble Arch Caves gives you one last taste of adventure before finishing your Shannon Erne Waterway adventure.

Once you have satisfied your taste for all things historical and adventurous, the town of Enniskillen is also home to a number of modern attractions. Whether you’re looking for a tasty bite to eat, a relaxing drink in the pub or a casual cafe for a post-trip debrief, you’ll find it here.