Explore Brittany peninsula and its waterway : the River Vilaine

Where is the River Vilaine?

The River Vilaine runs through the northwestern Brittany peninsula of France; it starts not far from the city of Rennes and flows down through the region, out into the Bay of Biscay.

A main artery of water across the whole peninsula, the river’s fantastic connections allow you to travel throughout Brittany with ease. It doesn’t matter whether you’re simply taking the picturesque route from the city to the coast, venturing off west to the Nantes-Brest Canal or north along the Canal d’Ille-et-Rance towards the channel.

Boating holidays that sail along River Vilaine offer up the perfect way to explore this region of France. A stand-alone region, Breton culture is a uniquely French way of life, as well as having its own history, cuisine and general Breton culture.

Travelling along this waterway will also allow you to visit both sides of the country; its northerly English Channel side and its westerly Atlantic coast. With the iconic city of Rennes dividing the river into two sections, there is ample opportunity to explore both the French countryside and its bustling cities.

By heading south at the river/canal junction, you can visit the famous city of Nantes, and by venturing north, you can also include Lorient in your River Vilaine cruise . With so much to see and do in the Breton peninsula, your holiday along the River Vilaine is one of the most rewarding in the entire French boating scene.

How to get to the River Vilaine

There are two main starting points for exploring the length and breadth of the River Vilaine . You can begin from the town of Saint-Martin-sur-Oust, which sits ever so slightly northwest of where the Nantes-Brest Canal joins the Vilaine River and close to the commune town of Redon.

By starting from this point, you can secure yourself a Nantes-Brest canal boat hire service right away, before you begin your adventure down the river.

The small canalside town of Saint-Martin-sur-Oust is the perfect starting point if only to soak up the idyllic nature of a small Breton settlement. Really setting the scene of French waterway travel and everything you can expect from canal boat hire in France. Although small, the surrounding area here is full to the brim with must-see sights, showing both local culture and its textured history.

Getting into this area of Brittany is made even easier thanks to the major cities of Rennes, Nantes and Lorient. Travelling from the other side of the country or from abroad is simplified down to these travel hubs. You can either take the train or fly into these major French cities, allowing you to begin your boating holidays at the starting points of Melesse and Saint-Martin-sur-Oust with ease.

However you decide to get to River Vilaine , it is only going to add to your overall experience of the river routes in this area of northwest France.

Best time of the year to travel along the River Vilaine 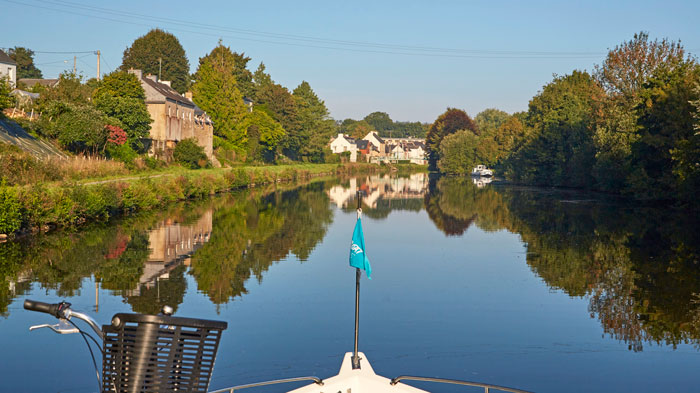 The northwest of France, jutting out into the English Channel (La Manche) and the Atlantic coast, is not overly famous for its glorious sunshine and heat. However, there are certain times of the year that offer up far better weather than others and will contribute to a more pleasant experience along the River Vilaine .

If you want the best chance of sunshine for your canal boat holiday in northwest France then opting to travel throughout July and August is your best option. It is the height of summer during these months and will give you the best opportunity for a holiday in the sun.

However, it is important to remember that this is also the prime holiday season for the people of Europe and the River Vilaine and wider regions are far more likely to be busy during this period.

5 things to see and do along the River Vilaine

Observe flora and fauna along the river

As you make your way along the Vilaine River in Brittany , you’re in for a real treat if you enjoy spotting various French plants, trees and lovely wildlife. Along the coast and right through the valleys of Brittany, the region is home to a plethora of wildlife that makes any boating journey here more than worth it.

Here in their thousands are a selection of bird species, many of which call the riverbanks home, while others fly in from the nearby coasts and hinterlands. Snipe, moorhens and herons can be seen in high numbers right down the very length of the river and watching them feed along the banks is the perfect boating pastime.

From the nearby rocky outcrops of the Bay of Biscay clifftops, birds such as fulmars, puffins, shags and shearwaters all make their way inland to freshwater fishing spots on the Vilaine. If you are extra lucky, you may even be able to catch sight of rarer birds such as ringed plover, the European bee-eater and the three-toed sandpiper.

It is not only the humble birdlife that grabs your attention when travelling upon the River Vilaine in France. After long being at low levels, even close to extinction, the beaver was reintroduced into the rivers throughout Brittany and at certain secluded spots of the River Vilaine, they can be seen in surprisingly high numbers. Alongside the beaver, the forested lands that surround the river hold populations of deer, foxes and sometimes wild boar.

Settling up along the riverbanks during the early morning dawn or the late afternoon dusk will give you the best chance of catching sight of the more elusive mammals and birds. Yet, when you do see these often disappearing animals, the reward makes it all the more worth it. The great expenses of Brittany and the rivers such as the River Vilaine have quickly become some of the best places to see such fascinating examples of North-West Europe’s ever-changing wildlife.

Try a spot of fishing along the river banks 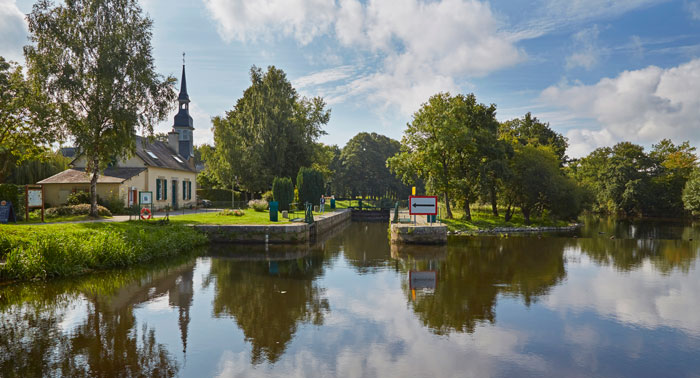 Pleasure boating along French waterways often goes hand in hand with the keen angler, and the River Vilaine is no different. The epic length of the river means there are numerous fishing spots along the way, some of these posts have naturally occurring populations of freshwater fish while other popular places are bolstered by added stocks of fish.

From south to north, you will come across different types of fishing spots. Some of these are boosted by official angling sporting spots, while others are stand-alone swims that you may need to be a little more experienced to spot. One of the most sought after fish species on the River Vilaine is the common carp. Attracting anglers from across the country and wider Europe, the common carp can be huge within the river and offer up some of the best carp fishing opportunities anywhere.

Aside from the common carp, other fish to keep an eye out for on the River Vilaine are roach, tench, perch, eel, bream, bass, perch and pike, all of which are here in healthy numbers. All in all, combining a fishing trip with a canal boat holiday down the River Vilaine is a great way of killing two birds with one stone, and you are sure to get the best out of both.

Explore the fascinating city of Rennes

With the River Vilaine running from one of the region’s main cities, Rennes, no journey along this Breton waterway would be complete without venturing into the city for a day. As the capital of Brittany, the city of Rennes has long held an important role in the entire region and this is noticeable as soon as you enter the city perimeter.

With a history that dates as far back as the Roman Empire, Rennes is a city full of history, culture, beautiful parks, and fascinating churches. This excellent history is balanced by the city’s modern attractions, whether this is the booming cafe and restaurant scene or the electricity of its citywide nightlife scene.

One sight that shows the age of the city is its Duchesne Tower, set within the ancient city walls. Built in the 15th century, the medieval tower joins the city’s walls and shows what a symbol of power Rennes was for the wider Breton region. The tower takes its name from Jehan du Chesne, the principal gatekeeper of Rennes and the tower’s first inhabitant.

In the northwest of Rennes is the La Place des Lices, famous for being the location of Rennes’ Saturday market. The market is a buzz and collection of the city’s population, where you can buy Brittany specialities, everything from Breton cider, the salted butter, and Reinette apples. Alongside the weekly market, La Place des Lices is also a great place to catch sight of the beautiful Breton architecture, a defining image of the city.

Wander around the Breton town of Redon

Standing on the banks of the River Vilaine , the humble town of Redon is the perfect example of quaint French commune towns nestled along the riverside. Visiting such a town is one of the highlights of any boating holiday in the region and gives the real-life impression of an image you would not be surprised to see on a Brittany postcard.

As your boat winds its way into the town, you will be taken back by the riverside views of traditional 18th century preserved buildings that line the canal waterfront on both sides. The half-timber buildings that make up the town take you straight back down the centuries to a time of laidback farming towns spread out all across the riverbanks and wider Brittany.

One of the oldest buildings in the area still stands in Redon. Found at 48 Grand Rue, this building dates all the way back to 1410 and is a wonder to behold. Another building not to be overlooked in Redon is the Abbatiale Saint-Sauveur, a medieval church in the heart of the town. With frescos and carvings throughout the church, its beauty is not to be understated and visiting the town for this alone is worth it.

Take the Nantes-Brest canal down to Nantes

Another of the most iconic cities in all of northwestern France, the city of Nantes has so much to offer for holiday-makers in the region. Even though the modern carve-up of France has meant that Nantes is no longer part of Brittany, throughout history, it was, for a long time, considered the capital of the Breton region. As the capital of Brittany, Nantes Dukes of Brittany ruled their lands from here until the Duchy was united with France.

One of the best places to see this seat of Duchy power is at Nantes’ Château des Ducs de Bretagne. Constructed in the 13th century, the Château was occupied for over three centuries by the ruling dukes and dukedom families of Brittany. Taking a stroll around the courtyards and ramparts of the Château des Ducs de Bretagne really takes you back to when this city was the seat of power and helps you get an understanding of the wider Breton region’s place in French history.