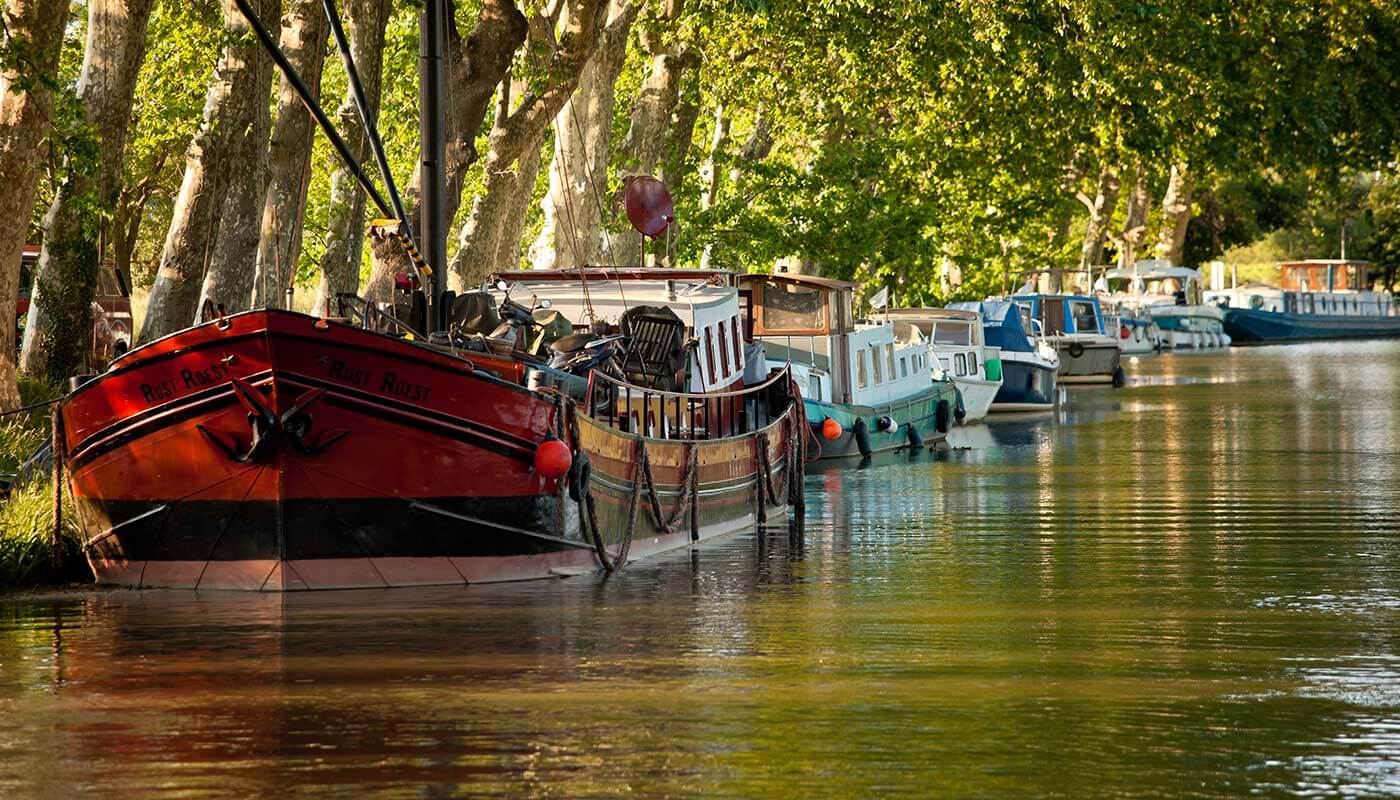 Departing from our base in Argens Minervois, you could either cruise towards the legendary citadel of Carcassonne or pass through some charming villages and maybe spend the night in the famous towns of Béziers or Narbonne.

Under the shade of great plane trees of the Canal du Midi, you’ll enjoy a rich regional cuisine of succulent dishes and magnificent wines. Before you arrive in Carcassonne with its crenelated towers, you will already have got a taste of the South with its large white stone fortified towns, and its medieval villages like the ones at Trèbes or Puicheric. Before you reach the junction for Port la Nouvelle, you will go under Le Somail bridge. Narbonne was the biggest Roman city in Gaul. There you can find one of Europe’s last five bridges lined with old and still inhabited houses. In the centre of the town, the Palais des Archevêques and Saint-Just cathedral make up an exceptional ensemble. At Béziers the Gothic cathedral of St. Nazaire towers over the hometown of Pierre Paul Riquet. It is time to go and have a swim in the clear blue waters of the Mediterranean for unforgetable boating holidays in France.

The
highlights of Argens Minervois

our routes departing from Argens Minervois

The routes shown are only suggestions; don’t forget that you can stop wherever you like on your cruise.

In the heart of the Minervois vineyards, you could moor your canal boat at the village of Puichéric and enjoy visiting the church of Notre Dame, a listed historic monument.

The commune is built on a rocky outcrop between the river Aude and the Canal du Midi. Some research allows us to affirm that the commune already lived 2000 years before J.C., under the name of Villacano.

While enjoying your boating holidays on the Canal du Midi, stop at the delightful little town of Trèbes, where you can admire its aqueduct/bridge and its church, both listed monuments.

Carcassonne, a UNESCO World Heritage Site, is Europe’s biggest medieval fortress. Its 52 towers stand proud above the lower town. All boating holidays on the Canal du Midi should include this city!

Sunbathe on the canals

The village of Le Somail is a 'must-see' on your canal boat cruise. Explore its little terraces along the Canal du Midi, the grocery barge or the second-hand bookseller – a big attraction for rare book hunters.

Capestang is a delightful little village that has everything you need to stop for the night on your cruise You'll also find shops and a market surrounding the collegiate church.

The village of Le Somail is a 'must-see' on your canal boat cruise. Explore its little terraces along the Canal du Midi, the grocery barge or the second-hand bookseller – a big attraction for rare book hunters.

Situated in the centre of several listed natural sites, the town of Narbonne, over 2000 years old, is a good mix between culture and relaxation. You can also take advantage of a stop in the city to go to the beach.

Capestang is a delightful little village that has everything you need to stop for the night on your cruise You'll also find shops and a market surrounding the collegiate church.

Sometimes called France’s oldest town, Béziers is a popular stopover for canal boats and is packed with history and culture. Rugby, wine and bullfighting festivals are also important features of life in the town.

If you want to book this cruise
Browse online the availabilities

Departing from our Argens base, we can offer the range of canal boats shown below. To see the full range of cruises available, please see our self-drive boat pages or contact our team who can help you to choose.

The traditional Pénichette®, very easy to pilot and perfect for couples and families.
From 2 to 7 people.

A spacious and well-lit boat, characterised by its lovely protected terrace at the rear.
From 2 to 12 people.

One of the latest range of Pénichettes®, offering considerable comfort thanks to their double inside and outside helm positions.
From 2 to 12 people.

Based on the strengths of the existing family of Penichettes®, this new generation of boats offers a completely new cruising experience.

Choose one of the finest yachts with the Linssen Grand Sturdy 34.9 boat! Elegance, high-quality furnishings and comfortable sailing are the hallmarks of these renowned boats.
From 2 to 6 people.

Cosy, elegant and designed as small yachts, the Europa boats offer decidedly modern comfort and aesthetics.
From 2 to 6 people.

Your departure
base Argens Minervois

If you have already booked your cruise and you want to reach your departure base: