As one of the most iconic canals anywhere in the world, the Canal du Midi has long been a favourite for boating holidays in France. The magical canal runs from the famous city of Toulouse to the south of France’s Mediterranean coast. French canal holidays along the Canal du Midi are popular for many reasons.

Some come for unbelievable landmarks and attractions close to the canal, others to immerse themselves in the amazing feet of canal civil engineering. Not only is the whole canal itself an amazing construction, but one section in particular always grabs peoples attention, the Nine Locks of Fonseranes .

Also known as the Béziers water staircase , travelling through these locks is a top highlight for anyone travelling along the Canal du Midi and for a good reason. So let’s take a closer look at the Fonseranes locks and what has made them a UNESCO World Heritage Site and a must-see for any canal boat enthusiast.


History of the Fonseranes locks

When the Canal du Midi was constructed in the late 17th century, the designers and engineers had to overcome the problem of crossing the River Orb, which stood 48 metres higher than the natural course of the canal waterway.

The locks consist of eight oval-shaped lock chambers, characteristic of the Canal du Midi, and nine gates, which allow boats to be raised a height of 21.5 metres (71 ft) over a distance of 300 metres (980 ft).

It was once necessary to manually operate the locks, now with heavy boat traffic and modern techniques, the staircase locks are all fully automated.

This was an amazing feat of design and engineering at the time and still to this day, this staircase lock is a true highlight of travelling along the Canal du Midi and is a must-do if you are considering a Canal du Midi boat hire.

How to use the Fonseranes locks?

For any canal boat enthusiast, you may be an old hand at travelling through locks, yet the Fonseranes locks are a whole new exhilarating experience. Different from a normal set of joined locks, the staircase locks at Béziers have only one set of gates between each chamber and water levels are maintained by use of a side pond.

You will undoubtedly be waiting your turn to enter the lock, as the Canal du Midi at this point is extremely popular. On entering the first section, you will hear the churning of machinery as the locks are now fully automated, ensuring a smooth transition for the large number of boats that make this journey.

Once it begins, the whole journey up the foothill bluff will take you around twenty to thirty minutes to complete, sending your canal boat up over twenty metres in such a short time.

What else does the region of Béziers have to offer? 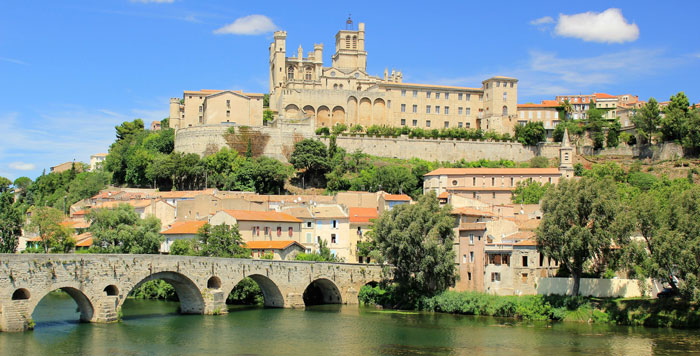 The Canal du Midi Béziers locks are named so because of their location along the canal. Built to allow boats to traverse the high bluff and the River Orb, the nearby settlement of Beziers is close by to Fonseranes locks and is an interesting attraction all within itself. Once you have travelled up the nine locks and reentered the Canal du Midi at Béziers , you spend a little while exploring the town itself.

One of the biggest attractions in the town is the Béziers Cathedral, known as the Cathédrale Saint-Nazaire-et-Saint-Celse de Béziers. This 13th-century cathedral dominates the town and gives you stunning views of the surrounding Fonseranes Locks . Another is quite a surprise for such a small town, The Fine Arts Museum (musée des Beaux-Arts). Opened in the mid-19th-century, this museum houses numerous works of art that make a refreshing stop on your way through the Canal du Midi.