Combining the trip along the River Shannon and River Erne in an Enniskillen boat tour gives you and your fellow holidaymakers the ultimate Irish and Northern Irish adventure. So let’s jump right in and see what Enniskillen boat trips have in store for the eager boater in the Emerald Isle.

Where to begin your boat cruise to Enniskillen

Although the town of Enniskillen, Ireland, is in the UK, part of Northern Ireland, the best Enniskillen boat trips are ones that combine both regions of the island. Therefore, starting from the town of Carrick-on-Shannon is by far the best option. This humble town on the banks of the famous River Shannon is a quaint and fitting place to being your journey.

With a Locaboat base, Carrick-on-Shannon boat hire has never been easier and will set you up to begin your journey northwards. After leaving the small town, you are all set to soak in the beauty of the River Shannon. Shannon boat hire allows you to travel along one of the most famous rivers in Europe, soaking up the rolling Irish countryside and its unbelievable nature.

As your journey takes you from the River Shannon across the River Erne, you will make the next of your biggest holiday highlights, passing from Ireland to the UK’s Northern Ireland. As it is still remiss a soft border, the passing from one nation to the next won’t be an issue, and with a slow and relaxing trundle up the river, the moment may even pass you by.

Lough Erne has a treasure trove of activities and is a naturally made playground. Much like the wider County Fermanagh, Lough Erne is a haven for fishing and competitive angling. The numerous inlets, islands and banks are home to a huge variety of fish species, including common roach, wild brown trout, bream, pike and even a number of salmon.

Lough Erne is also a fantastic place to move up and get back onto dry land. Canal boat hire in Ireland isn’t always just about staying on the water but gives you the chance to get to places you would not usually reach. The surrounding banks and countryside offer some of the best hiking and walking trails and are some of the most idyllic in all of Northern Ireland.

Welcome to the town of Enniskillen 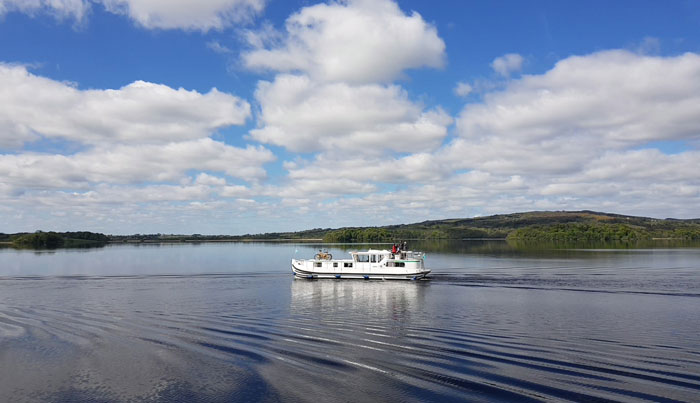 After leaving Upper Lough Erne, the ultimate destination in Enniskillen boat holidays appears before you, the town of Enniskillen itself. Having boated from the Irish town of Carrick-on-Shannon, up through the famous River Shannon and along the River Erne, this oasis of a town welcomes you in like an adventurer completing a long and fruitful journey.

One of the biggest attractions in the town, and the oldest, is Enniskillen Castle, drawing in thousands to visit its ancient walls and ramparts. Constructed in 1428, the castle has gone through a series of sieges down the centuries, both successful and unsuccessful giving it a book’s worth of stories to share with any visiting history buff.

The castle was remodelled as a Castle Barracks near the end of the 18th century to fortify itself against a possible invasion from the Napoleonic French army. Throughout the late 19th and early 29th century, Enniskillen Castle became the home of numerous Irish regiments within the British Army until it was decommissioned in 1950 and opened as a heritage site.

Alongside the castle itself, Enniskillen Castle is home to the Fermanagh County Museum, which tells the story of the county’s history, both cultural and natural. Your Enniskillen boat trip will take you along the waterway, bisecting the town. This gives you the perfect viewpoint of Enniskillen Castle and the heritage buildings along both sides of the River Erne.

Aside from Enniskillen Castle, the area is also renowned for a number of other attractions. One of the most notable of these is the UNESCO World Heritage Site of Marble Arch Caves. These caves are a great expanse of limestone caves and caverns hidden under the earth. First explored during the 1800s, and it wasn’t until the 1980s that they were opened as a show cave. Expanded walkways, metal handrails, electric lighting and more have opened the caves to visitors. Stepping down to this subterranean world is a great experience, unlike anywhere else in the region.

Not far from the Marble Arch Caves is another must-do activity in Enniskillen, the Cuilcagh Boardwalk Trail. This trail takes you up and around the foothills and small mountains to the west of the town.

If you want to continue your Enniskillen boat trip further north, there is plenty more to see. As you exit the town via the River Erne, the waterway again opens into a vast idyllic landscape of Lower Lough Erne. Even bigger than its upper namesake, Lower Lough Erne covers an area of forty-two square miles and is more like an inland sea to the eye. With more fishing, wildlife watching and general relaxation, you can spend a good while exploring Lower Lough Erne.