Journeying along the Canal du Midi has long been one of the most sought after adventures in European canal boating holidays. Meandering its way through southern France, from the famous city of Toulouse, right down to the picturesque Southern France lagoon of Étang de Thau, the epic 240 kilometres of waterways are some of the continent’s most rewarding.

As the Canal du Midi makes its way through the historical region of Occitanie, the fact that it is considered one of the most impressive and greatest construction works of the 17th century becomes glaringly obvious.

Where this construction is at its most impressive is in its locks. The Canal du Midi has an impressive 86 locks along its course, with many of them containing numerous chambers, making them even greater in size. Both the design and navigability of the locks on the Canal du Midi make travelling along this waterway one of the most interesting and rewarding anywhere. 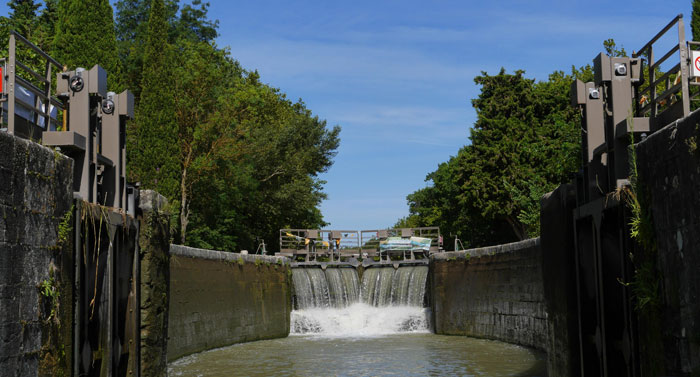 Aside from wondering how many locks are on the Canal du Midi , it’s also worth taking a look at some of the best one’s along this historic waterway. From the everyday locks to architectural masterpieces and other mind-blowing feats of canal engineering, the sheer variety in designs makes this one of the most interesting boating holidays in France.

Arguably one of the most famous sections of the Canal du Midi, especially when it comes to locks, is the stretch of water that runs close to the town of Béziers. Known as the Canal du Midi Fonserannes locks , they have become an attraction all in their own right and not only for the anoraks who love such things.

What really sets these locks apart from any other part of the Canal du Midi is the fact that there are eight of them. The eight locks of Fonserannes are built in a staircase-like formation, allowing the man-made waterway to climb 21.5 metres over a distance of 300 metres. This was done to climb and cross the Orb River and join the canal further downstream.

Although an aqueduct was constructed in 1858 to cross the river, the eight oval locks of Fonserannes were reduced to seven chambers, with boaters leaving here instead. All in all, the Canal du Midi Fonserannes locks are one of the true highlights of the whole waterway and a mecca of sorts for true canal boat aficionados.

Another of the interesting locks you’ll come across while you’re driving your Canal du Midi boat hire is the Agde Round Lock. When this particular lock was constructed in the late 17th century, it was, and to some extent still is, one of the most unique locks anywhere in the world. This is because of its shape; it’s a circular lock that allows boats to turn around and is made up of three sets of lock gates, each with its own water level. Located near the end of the canal journey, close to Étang de Thau and the Mediterranean-linking Hérault river, it is seen as one of the final points on the whole of the Canal du Midi and a fantastic way to end the journey.

Navigating the locks along the Canal Du Midi

Once upon a time, travelling along the Canal du Midi required a lot of personal strength and stamina, having to manually open and operate each lock as you went along. As we have seen, with just under 90 locks on the canal, this would have been an exhausting process for many holidaymakers.

Now, since the modernisation of the canal’s locks, many of them work off electrical setups and no longer require the manual strength from boaters travelling through them. That means you can sit back, relax and enjoy the water, appreciating the locks for what they truly are: impressive feats of engineering.