Take to the waters on a Clonmacnoise boat trip

Christianity and Ireland have long been interchangeable throughout much of the country’s history. Considered to be one of the first northwestern European nations to embrace the religion, its monastic past is at the heart of Irish history, and nowhere is this more starkly seen than at the Clonmacnoise monastery .

Clonmacnoise in Ireland is an area of both historical significance and natural beauty, and making a Clonmacnoise river cruise is a fantastic way to enjoy them both. Boating holidays in Ireland are unique in this way; combining a sense of history, a love of nature and an all-around immersive Irish experience.

Let’s take a look at the famous Clonmacnoise Abbey , its place in Irish history and how you, too, can enjoy the delights of the Irish rivers and countryside.


Where is Clonmacnoise in Ireland?

Clonmacnoise is located in the Irish Midlands, which forms the central part of the island. Straddled along the eastern banks of the River Shannon, the site stands at the very northwest of the County of Offaly, just opposite the County Roscommon border. The Clonmacnoise monastic site was chosen as it sat at the centre of the ancient Uí Maine Kingdom and at the crossing of the bogs of Central Ireland known as the Esker Riada. This made it an extremely strategic location at the time of its construction.

In the year 544, a young man called Saint Ciarán from Rathcroghan in County Roscommon arrived at this site with several companions and met King Diarmait Uí Cerbaill, who would later go on to become the first Christian crowned High King of Ireland. Together, they would build the first Christian church at Clonmacnoise, making them the first people to found the site.

At the time of construction, the first church was a simple wooden structure and one of a very humble nature. A mere four years later, Saint Ciarán fell victim to the plague and died at the age of thirty-three. Considered to be the historical founder of the site, Saint Ciarán was buried under the wooden church, which is now the site of the 9th-century stone oratory, Temple Ciarán which is named in his honour.

Throughout the site’s history, many more buildings were to be founded here, turning the humble wooden structures into much longer-lasting stone ones. Churches, Abbeys and more secular buildings would spring up on the site, with the largest growth being between the 8th and 12th centuries.

The site grew from just a few several inhabitants during its founding, to between 500 to 2,000 by the 11th century. The Clonmacnoise history is plagued by multiple instances of raids and attacks, falling victim to attacks from local Irish, Vikings and Norman invasions.

What is Clonmacnoise famous for?

Clonmacnoise is famous for being one of the first significant Christian sites in Ireland. Its strategic location allowed it to grow into a hub of activity until it became one of the most famous places in Ireland. One of the main reasons that this fame grew was down to the religious nature of the site. It became a great centre for learning, based around the Christian faith, and drew in scholars from all over Europe.

Throughout modern times, Clonmacnoise has retained its fame for being one of the nation’s most sacred and historical sites. It was even a stop-off point for Pope John Paul II during his visit to Ireland in 1979.

Where to begin your Clonmacnoise journey

Clonmacnoise is one of many sites and attractions along the famous River Shannon in Ireland, and numerous Shannon cruises include a visit here. One of the best places to start your River Shannon and Clonmacnoise adventure is from the town of Banagher, which sits just south of the religious ruins.

As a staging post for Locaboat travel, Banagher boat hire will allow you to start your journey along the River Shannon in style and comfort. The town itself is a fantastic place to begin your sightseeing activity.

Stop by JJ’s bar for a tipple and a sing-song, where local artists perform traditional Irish folk music to the accompaniment of locally brewed Bo Bristle beer. Twinning with the historical sights you’re about to see upriver, Banagher is also home to the Napoleonic Fortifications which were built here to protect the island from being invaded by the French forces during the late 18th and early 19th centuries.

Top attractions to see during your Clonmacnoise boat trip 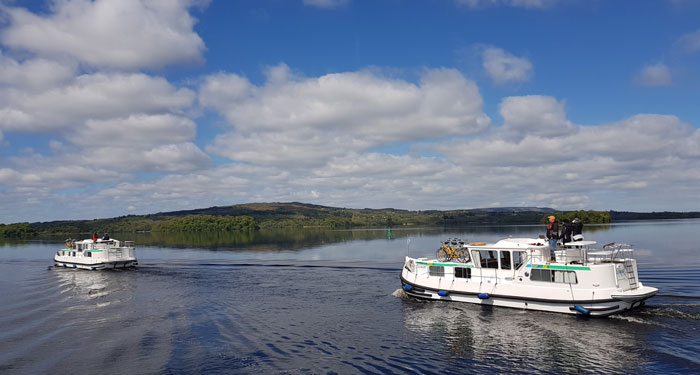 With your canal boat hire sorted, you can leave the town of Banagher and head north along the River Shannon and towards the famous Clonmacnoise ruins. Along the waterway, you can also enjoy a number of sights and experiences before you reach the iconic site.

Best of all is simply the natural landscape and surroundings of the River Shannon and the county lines. Stretching northwards from Banagher, the landscape proves why this nation is known as the Emerald Isle. With rolling green fields lush with vegetation, woodlands and a variety of flora and fauna, the boat ride is one that is filled with laidback bliss.

The first settlement you will come to is the quaint village of Shannonbridge; a general halfway point between Banagher and Clonmacnoise. The village gets its name from being one of the first constructed crossings over the River Shannon.

A long and textured history exists in Shannonbridge, with the remains of the 18th-century fortifications still standing. On the west bank of the river, one of these forts has been converted into the ‘Old Fort Restaurant’, and on the eastern banks, there is the Shannonbridge Fort & Cafe – both of these make for a great stop of points for something to eat on your way upriver.

For those who aren’t in a huge rush to reach the Clonmacnoise site northwards, Shannonbridge and the surrounding banks are renowned for being a fantastic place to fish.

What to see at the Clonmacnoise site itself

Clonmacnoise is only around four miles north of Shannonbridge and will quickly come into sight on the right eastern banks of the river. With so many Clonmacnoise facts to learn and so much to see, it’s best to spend a good while here soaking up the history and the breathtaking beauty of this part of rural Ireland.

Two of the most iconic constructions in the Clonmacnoise site are the towers. Rising up over the landscape, it is these that you’re likely to see first as your boat trundles around the corner. One of the most famous of these towers is the O’Rourke’s Tower, thought to be named after 10th-century Connacht king Fergal O’Rourke. Constructed in the early to mid 12th century, the tower’s very tip was destroyed when lightning struck. Another of the iconic towers is the Temple Finghín & McCarthy’s Tower. This Romanesque tower and church is at the very edge of the site’s boundary and rises up over the landscape.

Aside from the towers, Clonmacnoise is also renowned for its many crosses; a symbol of Christianity. The North Cross is the oldest of the remaining crosses. Constructed in the early 9th century, only the base and shaft of the cross remains. The cross is adorned with an image of Cernunnos, the Celtic God of hunting and fertility, displayed on the east face of the shaft. This shows how non-Christian images were still being used.

One of the biggest draws is the Cross of the Scriptures, a four-metre-high sandstone cross and is one of the most skilfully executed of the surviving high crosses in Ireland. On the cross is an inscription that asks for prayer for Flann Sinna, King of Ireland, and Abbot Colmán. On the other side of the cross are biblical motifs including the Crucifixion, the Last Judgement, and Christ in the Tomb.

The ruins of a cathedral, known as Temple McDermot, was constructed in the early 19th century, under the orders of Flann Sinna and has been somewhat controversially resorted to. Another of the temples, Temple Melaghlin, was built in the early 13th century and is believed to have housed the scriptorium, the room where the manuscripts were designed and decorated.

Spending time walking around the site, you will quickly see how the area of Clonmacnoise has changed throughout the centuries and has truly made its mark on the history of the island. Once you have explored the many landmarks here, you may wish to head inside to the visitor centre. Here you can see many original artefacts and structures that were taken from the elements and preserved for many decades to come.

A gateway to the Emerald Isle, the Grand Canal is the perfect way to explore everything Ireland has to offer. Here’s everything you need to know about this fantastic waterway including how to get [...]

As one of the most iconic canals anywhere in the world, the Canal du Midi has long been a favourite for boating holidays in France. The magical canal runs from the famous city of Toulouse to the [...]