What is the best area for canal boats in France?

The industrial revolution in France brought about massive change rapidly and early on – similar to many other western European nations. One of the biggest byproducts of this was the construction of canals. These canals and other natural waterways crisscross the country from every point on the compass. While they may no longer be used to transport industrial goods, they have left behind a myriad of routes that are perfect for canal boat holidays.

Some of these canals are renowned as must-see places within their own right; famous routes such as the Canal du Midi in southern France are on many boaters’ buckets lists. On the other hand, there are other less well-known areas for boating, such as the Canal de la Marne au Rhin in the northeast of the country or Canal de Garonne in southwest France.

These and many more are some of the best areas for canal boats in France , each offering their own boating holiday delights.

Let’s take a look at exactly what each of these canals have to offer.

Arguably one of the most famous canal routes in all of France, the Canal du Midi runs south of the city of Toulouse right through southwestern France to the Mediterranean coast. Constructed in the late 17th century, the canal was an amazing feat of engineering for the time and is still highly respected today.

Sitting in the south of France, with the Mediterranean coast only a few miles away, the beautiful weather alone makes this route one of the best to travel in France. Alongside the beautiful flora and fauna that grows and lives here thanks to the Mediterranean environment, Canal du Midi boat hire is popular thanks to the range of sights you can see. From the awe-inspiring medieval citadel of La Cité to trying the classic French dish of cassoulet in Castelnaudary, Canal du Midi is the ideal French canal journey.

You’ll find the Canal de Bourgogne nestled into the east-central French region of Burgundy. Following the valley of the Armançon River, the Canal de Bourgogne is considered to be one of the most picturesque canals to explore in the country. With stunning scenery consisting of historic chateaus, poplar trees and a myriad of idyllic villages, it really is a sight to behold.

One of the best things about this canal route is the fact it passes through a number of must-see cities. Chief of these is Burgundy’s historic capital city of Dijon. Here, alongside the commune town of Montbard, you’ll discover the perfect balance between rural canal exploration and city sight-seeing. 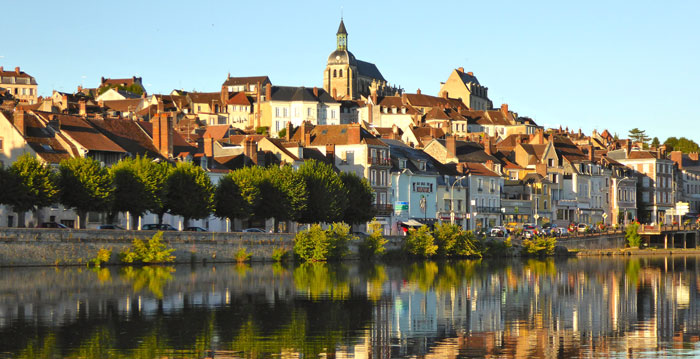 Canal du Nivernais is a waterway running through central France, connecting the water basins of the Seine and the Loire rivers. A real mixture of landscapes and cityscapes can be seen on either side of the canal. With one side descending to the Loire, the canal winds through a landscape dominated by rolling fields of grazing white Charolais cattle.

The other route meanders through the Morvan massif mountainous range, following an impressive series of locks called the staircase lock: a row of 16 locks in the town of Sardy-Les-Epiry. As the Canal du Nivernais is exclusively navigatable by leisure boats only, your journey along this canal will be one that is of pure relaxation, making it a popular choice for holidaymakers.

Standing alone, the Canal de Garonne offers the perfect way to explore the idyllic historic villages of western France. One of the best of these is the village of Buzet-sur-Baïsse – perched high upon the hills surrounding the valley, its Roman links make it a must-visit for history buffs. By travelling along the full route of the Canal de Garonne, you can visit two of the most popular cities in France; Bordeaux and Toulouse.

One of the oldest waterways in France, the construction of Canal de Briare took place in 1604 and was the first summit-level canal ever built in Europe. Only a few hours south of the capital Paris, Canal de Briare is a popular destination for canal boat hire in France for anyone wanting to combine a trip to the capital with a boating adventure.

Alongside its location and historic construction, the serene Canal de Briare and its laidback feel makes it a great area to travel for those who are new to the world of canal boat holidays. For the largest extended holiday, this canal also allows you to join a longer route and travel from Paris all the way to Lyon. 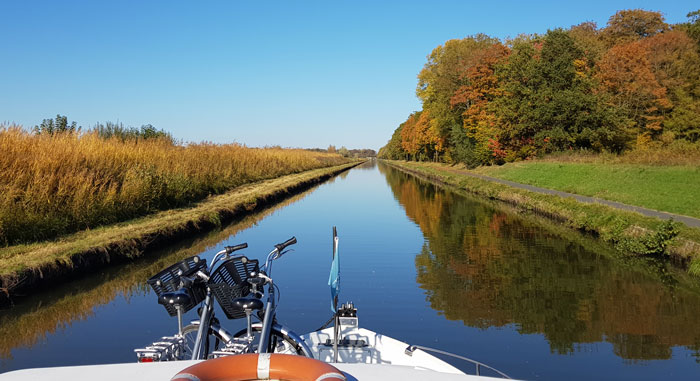 Located in the far east of France, the Canal de la Marne au Rhin connects the River Marne to the Alsace-Lorraine city of Strasburg. The combination of beautiful countryside in Lorraine, the steep-sided wooded valleys and picturesque Alsatian villages makes it one of the most popular waterways to travel in France.

Its mixture of idyllic countryside and canal tunnels means that travelling along the Canal de la Marne au Rhin is never dull. For the more adventurous travellers, the Canal de la Marne au Rhin and its connecting waterways allow you to not only travel through France but cross the international borders into Germany – only adding to the plethora of travel opportunities in this region.

The Nantes-Brest canal is a waterway that really defines the French region. Taking boaters through the northwest region of Brittany, the Nantes-Brest canal connects two of Brittany’s most visited cities, Nantes and Brest. With a unique Breton culture found throughout this area of France, a boating holiday will help you immerse yourself in the ways of Brittany.

Whether this is through its unique landscapes or Atlanlic coastline, its local cuisine or even a chance to hear the local Breton language – the Nantes-Brest canal is a truly rewarding way to see this often overlooked part of France.