Starting its life at the Shannon Pot in the very north of the country, and travelling 360km south to the Atlantic Ocean, the River Shannon is officially Ireland’s longest river. The sheer length of the River Shannon presents the perfect opportunity to enjoy the sights of Ireland from its most famous waterway, and what better way to do that than with a River Shannon boat hire .

Here, we take a closer look at the question, where does the River Shannon start and end? , and highlight some of the key places to explore if you’re planning a boating holiday in Ireland.

The Shannon Pot, in the northern reaches of Ireland, is the official River Shannon source. Found in West County Cavan, the waterway is just a trickle, and while a River Shannon cruise is out of the question here, there’s plenty of on-land exploration to do in the area.

You’ll find the Shannon Pot along Cavan Way, a long-distance walking route peppered with sites of geological importance. The most significant of these is the Marble Arch Caves Geopark, home to huge limestone caves, rare damp ash woodlands and underground river networks. These unique landscapes are thought to have been carved over 320 million years ago and make for a fascinating stop before starting your water-based adventures in the Emerald Isle.

Top destinations along the River Shannon

Canal boat hire in Ireland is a fantastic way to experience the River Shannon in all of its glory, from its source to its mouth. Here’s what you can expect along the way.

The Upper Shannon River is considered to be everything above the jumping-off point of Carrick on Shannon. If you are considering Shannon boat hire while you’re in Ireland, you’ll want to head north from Carrick-on-Shannon to discover quaint Irish towns, villages swathed in centuries of history and landscape upon landscape of rolling green hills.

Just one of the towns you’ll come across is Boyle, a quintessentially Irish town. Cobbled streets and age-old pubs await you in this small town which dates back to the early 12th century. As well as wandering around its picturesque streets, one of the main attractions here is Boyle Abbey, a monastery built by the Cistercian order in 1161.

Heading even further north, you’ll even make it to the expansive open waters of Lough Erne. One of the largest lakes that sit along the River Shannon, it’s a haven for watersports, bird watching and, of course, angling. In fact, River Shannon fishing doesn’t come much better than this as the waters here are brimming with roach, bream, pike and perch. Keen anglers may even want to coincide their River Shannon cruise with one of the many competitions that take place here during the warmer months. 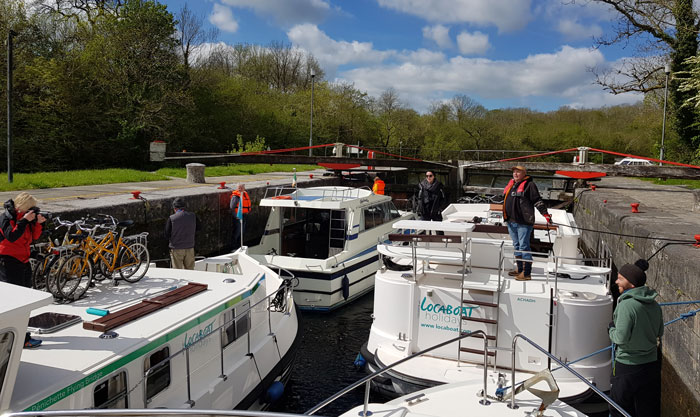 However, before you take to the waters, you might like to check out what Carrick on Shannon has to offer. On a warm sunny day, there’s nothing more pleasant that grabbing a coffee from one of the independent cafes in town, and strolling along the riverbank boardwalk. This leisurely walk suits all fitness levels, and leads you along the banks of the canal, through grassy fields and into the best of the Irish countryside.

Back in town, make time for a visit to the smallest chapel in Europe, Costello Chapel, or the 19th-century courthouse, which has now been transformed into the town’s cultural and artistic centre.

The southern realms of the River Shannon have even more fascinating sights to peruse, whether it’s the historic ruins of Clonmacnoise, the Renaissance castle of Portumna or the energetic city of Athlone. You’ll also find another Locaboat base in Banagher, offering the perfect opportunity for River Shannon boat rental .

One of the major attractions in Lower Shannon is Lough Derg. Another of the many lakes on the River Shannon , Lough Derg is most well known for the Irish villages that sit along its shoreline and the peaceful and idyllic surroundings. The perfect place to moor up and enjoy a peaceful evening in the great outdoors, Lough Derg is a fantastic choice if you simply want to get away from it all.

To answer the second half of the question, where does the River Shannon start and end?, we’ll head straight to its mouth, where the water spills out into the Atlantic Ocean. Named the Shannon Estuary, this is the official end to the River Shannon.

Similar to the source of the river, you won’t be able to take your River Shannon cruise boat this far south, but that doesn’t mean you can’t enjoy the area. The main city here is Limerick, sitting at the head of the estuary. The third-largest city in the entirety of Ireland, and one of the oldest, it is a vibrant destination, offering up fantastic city break opportunities, from the historic King John’s Castle and City Gallery of Art to the Milk Market and People’s Park. And, for those who enjoy a tipple or two, there are plenty of Irish pubs to go around.

Where does the River Shannon start and end?

As we have explored, the River Shannon starts in the north of Ireland, in a spot known as Shannon Pot, and ends near the City of Limerick at the Shannon Estuary. Throughout its 360km mile journey its winds past iconic Irish cities, lakes and must-see sites, making for an unmissable boating location.