Which is the best canal in France?

In a nation that is crisscrossed by numerous rivers, canals and other waterways, France is somewhat of a Mecca for canal boat enthusiasts. Yet, one question that constantly pops up to both the uninitiated and the experienced boater is this; which is the best canal in France? Though we can say that canals such as the Canal du Midi, Canal de Bourgogne, Canal du Nivernais, Canal de la Marne au Rhin, Nantes-Brest Canal and Canal de Briare are all some of the best canals in France, finding the ideal one for you is a very personal choice.

With each of France’s canals offering its own unique experiences and landmark attractions, deciding which is the best canal for you takes careful deliberation. Let’s take you through some of the most popular and best canals in France, leaving you free to try them all out for yourself! 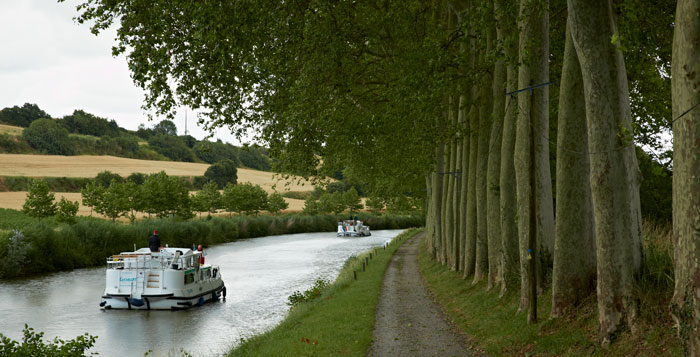 Arguably one of the most famous canals in Europe, if not the world, the Canal du Midi has long captivated the imagination of canal boaters travelling through Europe. First constructed in the late 17th century, the Canal du Midi was one breath-taking feat of engineering for the time.

Running between the iconic French city of Toulouse and the Mediterranean coast’s Etang de Thau lagoon, the canal takes passengers through some of the most pristine regions of southern France. Aside from the general beauty and surrounding nature along the Canal du Midi, the route is also peppered with some of the most attractive and interesting sights in all of southern France.

From the Cité de Carcassonne, which is a breathtaking medieval citadel that looks like it has jumped straight out of a fantasy novel to the beautiful town of Castelnaudary which the canal runs directly through, the Canal du Midi is a waterway that is home to endless points of interest.

Flowing through the heart of France’s Bourgogne region, the Canal de Bourgogne is almost the epitome of top canal holidays in Europe. Running through the idyllic countryside of eastern France, your journey along the Canal de Bourgogne is one that is filled with spectacular sights. These may be the simple charm of the rolling Burgundy countryside or the multitude of UNESCO and historical spots along the way.

The canal does not only run through small hamlets, farmsteads and picturesque towns but also take you directly to captivating cities such as Dijon. This combination of quiet solace and tourist hotspots makes Canal de Bourgogne one of the best destinations for boating holidays in France, especially for those who wish for a balanced holiday consisting of both rural and metropolitan France.

Not far from the Canal de Bourgogne is another of France’s best canals, the Canal du Nivernais. The Canal du Nivernais connects two of the country’s main river basins, the Loire and the Seine. What makes Canal du Nivernais so interesting to travel along is the difference between both of its banks. With one side dominated by limestone outcrops and foothills, the other consists of flat plains of stunning French countryside.

The balance between travelling through incredible cities such as Auxerre and vast open spaces such as the Morvan Regional Natural Park makes the Canal du Nivernais such a rewarding canal to travel down. With the Canal du Nivernais running down the heart of the country, a canal holiday here will allow you to enjoy the many facets of France, whether that’s its rolling countryside or hilly foothills that surround it on either side.

For those looking for a French waterway holiday that mixes up cultures and influences, then the Canal de la Marne au Rhin is the canal for you. Connecting the Marne and the Rhin, Canal de la Marne au Rhin runs from the outskirts of the French capital all the way to the French-German border at Strasbourg. This area of France has long held both French and German ties, making it a real melting pot of central-western Europe.

Crossing this area of Alsace-Lorraine, the Canal de la Marne au Rhin will take you through some of the most iconic cities, including Nancy and Strasbourg. With its river and canal connections, boating along the Canal de la Marne au Rhin all the way to the border can also allow you to pass over the international border and even make your French holiday into a German one.

Although we are well aware of the popular inner-French regions and the popular south of France destinations, the region of Brittany often goes overlooked. Yet this almost culturally autonomous region of France has so much to offer to holidaymakers, and the Nantes-Brest Canal will help explore the region with ease.

Connecting the two major Breton ports of Nantes and Brest, the Nantes-Brest Canal is the perfect south to north canal route, taking in all that the region and peninsula have to offer. Bookended by these two magnificent French cities, the canal is an ideal cross-section of life in both rural and urban Brittany.

In between the two destinations is a swathe of Breton countryside, dominated by traditional Breton villages and numerous chateaus. All of this makes the Nantes-Brest Canal one of the best in France.

One of the oldest canals in all of France, the Canal de Briare was the first summit canal to be constructed in Europe and is a must-travel for serious canal barge enthusiasts. Canal de Briare runs from Montargis, just south of Paris and southwards to the Loire. Although one of the smallest of the famous French canals, Canal de Briare is up there with the best, that’s due to its historical and cultural value.

Being so close to the French capital, travelling along the Canal de Briare is a favourite amongst beginner boaters, allowing them to fly straight into the Parisian streets and travel south to the start of the Canal de Briare. Not only is it super accessible, but it also has numerous beauty spots along its short route, only adding to Canal de Briare’s appeal.