How long does it take to sail the Canal du Midi?

One of the most famous waterways in all of France, the Canal du Midi runs for 150 miles through some of the most picturesque and cultured parts of southern France.

French canal holidays along the Canal du Midi take around ten days from start to finish, but this amount of time can vary, depending on what you want to get out of your trip.

How long does it take to sail the Canal du Midi?

When it comes to answering the question “How long does it take to sail the Canal du Midi?”, there’s no one-size-fits-all answer. It all depends on the sights, landmarks and attractions that you’d like to see along the way.

Remember, boating holidays along the Canal du Midi are some of the best in Europe, not only for the sailing itself but the picturesque landscapes that surround the waterways. When you’re choosing how long you want to spend on the Canal du Midi, you’ll need to carefully weigh up how much time you have to spare, which land-based sights you’d like to see and which route through the canal you’d like to take.

Of course, you can choose to simply sail through the canal without stopping, and you’ll make the journey, much faster, though it would be a shame to miss out on some of the sights along the way. With most canal boats travelling between 4-6mph, you’ll also be limited by how fast you can actually travel too.

To help you plan your ideal canal boat holiday in southern France, here are a few sights that we’d recommend seeing along the way.

Top Sights to see along the Canal du Midi 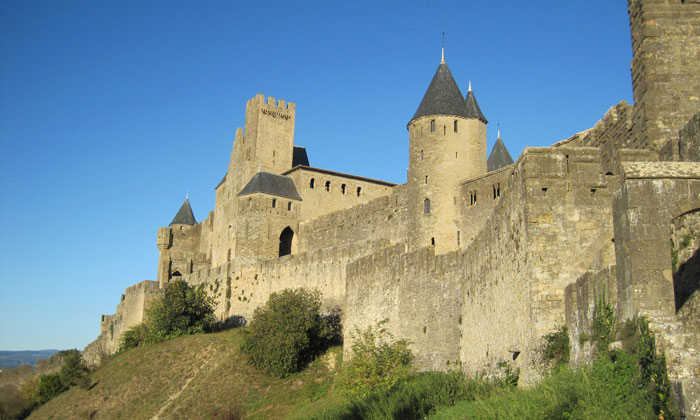 As you travel along the Canal du Midi there are endless sights to see and towns to visit, whether you’re interested in history, food, nature or something else. Here are a few of our top must-see sights.

Explore the historic citadel of Carcassonne

Considered to be one of the most spectacular sights along the Canal du Midi, Carcassonne is a huge fortified citadel city that dates back to the medieval era.

Appearing like something from a high-fantasty novel, the huge fortifications are a sight to behold. Set against the backdrop of the Pyrénée Mountains, the vast castle and citadel is a picture-perfect example of medieval architecture and demands to be explored.

With a combination of high ramparts, towers, battlements and turrets, getting lost in the citadel is a day well spent. Floodlit after the sun goes down, Carcassonne becomes a magically lit place after dark.

Discover the picturesque village of Minerve

Minerve village has gained a reputation as being one of the most beautiful villages in all of Europe. Set atop a rocky outcropping at the junction of the Cesse and Briant Rivers, the village of Minerve is home to 13th-century castle ruins – only adding to its beauty.

The rolling green hills surrounding the village are some of the most idyllic along the Canal du Midi and worth exploring. French wine lovers can also indulge in visiting the vineyards that surround Minerve and sample wine of the same name. Combining wine tasting, serene walks and local history, Minerve is a must-see when in the area.

Sample some foodie favourites in Castelnaudary

Home of the cassoulet, a hearty, slow-cooked stew made of pork, white beans and vegetables, Castelnaudary is said to be one of the best places to sample this traditional French dish.

Invented more than 100 years ago, each region in France puts its own twist on the recipe, but it’s thought that the bistros in Castelnaudary are where you can eat it at its most authentic.