Why was the Canal du Midi built?

Arguably one of the most famous canals and waterways in Europe, if not the world, France’s Canal du Midi is as iconic as it is well known. Boasting a long and textured history, the Canal du Midi is a marvel of civil engineering and stands as a testament to the ingenuity of its builders. Understanding why was the Canal du Midi built and how it has changed over the centuries gives you a far better understanding of the waterway. When you’re enjoying boating holidays in France along the canal, its history and cultural significance will be far more advanced.

Canal boat holidays haven’t always been the main reason why many have navigated the waters of the Canal du Midi; the canal has served many purposes over the centuries. Canal du Midi has gone down in France’s history as one of the best shining examples of construction and harmony between man and nature in all of southern France. So, read on to find the answer to why was the Canal du Midi built?

History of the Canal du Midi

The idea of constructing a canal that would connect the Atlantic Ocean to the Mediterranean Sea had been a vision for centuries. Roman leaders, the famed 8th century King of the Franks, Charlemagne and the early modern era King Henri IV all dreamed of building a water highway connecting the two main European bodies of water. Although none of these early visions came to fruition, the early idea of the Canal du Midi never disappeared.

It wasn’t until the early 1660s that Pierre-Paul Riquet submitted workable plans to the then king, Louis XIV. Construction got underway in the year 1667 and would last for four years, with the first boats using the Canal du Midi in May 1681. The reason behind constructing the canal was to allow the free flow of boat traffic from the Atlantic Ocean to the Mediterranean Sea. This was successfully done by constructing the canal from Étang de Thau on the Mediterranean coast all the way to the city of Toulouse. Toulouse is then connected to the Atlantic coast via the River Garonne.

By the 1980s, there were only two boats carrying freight along the Canal du Midi, and by 1989, this ceased altogether. The long history of the Canal du Midi spans the whole modern era of southern France, from industrial aid to a popular tourist destination for canal boat holidays.

How the Canal du Midi has changed 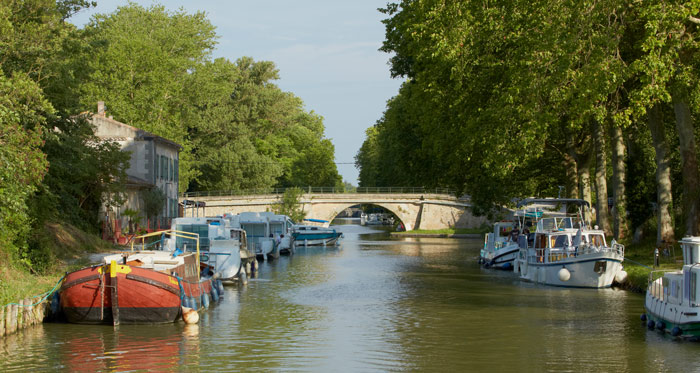 The long and textured history of the Canal du Midi means that this route has changed its identity and appeal several times over the centuries. Originally, the canal was designed and constructed purely for economic reasons, allowing cargo and freight to move along the waterways, connecting the Mediterranean Sea with the Atlantic Ocean.

Throughout the first few centuries, the Canal du Midi would appear to many as a purely industrial landscape, with countless boats carrying goods along the waterways. These early boats were twenty metres long and were pulled along by horses along the banks. In the 1930s, these horse-pulled boats were replaced by motor barges.

This industrial landscape and hive of activity that once defined the Canal du Midi has completely changed in modern times. Today, the 150-mile-long waterway is now seen more as a pleasure destination and one of the most popular places for boating holidays in France. This has swapped freight boats for the more touristic chartered boats, restaurant boats, or hotel barges. Far busier than France’s iconic Parisian River Seine, the Canal du Midi sees 10,000 boat passages per year pass along the water.

This boom in river tourism and canal boat hire on the Canal du Midi has changed the canal from a purely functional waterway to a scenic one. As visitors boat their way along the canal, they can take in the stunning scenery from the southern French countryside, visit numerous towns and cities and enjoy the sights.

Canal du Midi boat hire is fast becoming one of the most popular ways to enjoy a boating holiday in France. The winding waterway takes holidaymakers from the sun-soaked coast of the Mediterranean Sea at Étang de Thau right through to the iconic city of Toulouse. Étang de Thau allows boaters to take in the crystal clear waters of the lagoon and surround themselves with beautiful wildlife such as pink flamingos and marine life such as jellyfish and Mediterranean fish.

Heading northwards, the Canal du Midi spoils boaters with the seemingly endless number of must-see sights along the canal’s banks. The first of these is the village of Puichéric, in the heart of the Minervois vineyards. Take time to wander through this charming landscape and visit the church of Notre Dame, a listed historical monument.

As you make your way further westward along the Canal du Midi , you will come to one of the most iconic and famous sights in all of southern France, the citadel city of Carcassonne. This UNESCO World Heritage site is one of Europe’s biggest medieval fortresses. Its 52 towers stand proud above the lower town, creating a jaw-dropping view that almost seems out of the pages of fantasy. This is just a taster of the amazing sights and experiences you can see and do along the Canal du Midi.

Why was the Canal du Midi built?